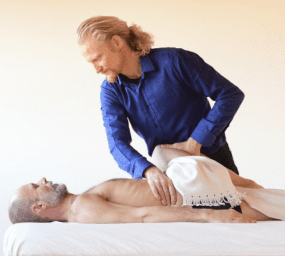 What is the roots of Manuvision body therapy? The idea of treating psychical conditions through the body is not new. Kristoffer Glavind Kjær talks about the influences from body psychotherapy and Wilhelm Reich

According to one of the founders of Manuvision, Kristoffer Glavind Kjær, the history of body therapy can be linked to especially one figure: Wilhelm Reich, an Austrian doctor and psychoanalyst, who took part in the Freudian movement.

“Reich is central to body therapy, because he found out that the connection between mind and body is exactly in the tensions. He saw that if we cannot live out certain feelings we tense up to survive. And if we don’t get that tension to relax or allow ourselves to live out  our emotions, we are contracted in what he called a “muscular armor”. The muscular armor prevents the body from moving freely and limits the way we live our life. “ – Kristoffer Glavind Kjær

Reich was puzzled by Freud’s method in psychoanalysis where you were supposed to lay on a bench and the treatment evolved around expressing thoughts verbally. Freud believed that people could be cured by making conscious their unconscious thoughts, motivations and repressed conflicts, thus bringing it to the surface where the client could deal with it.

Reich thought that there must be another layer under the surface, that is not linked to our verbal expression, but to our tensions and emotional state in the body.

He did his research by touching people’s bodies – which no one did in the 1920ies and 30ies. By studying how people reacted to body manipulation and breathing techniques, he saw what happens in the body when we hold on to aggression, grief, sexual desires and other emotions, we cannot express freely. People started to cry and the body started to tremble. Reich saw this as the actual “psyche” – a “stream of life” that is something inside our self that wants to come out. By working with the body – that stream of life or life force – he saw that we can unleash repressed emotions and conflicts through the body therapy.